VIDEO SOUNDTRACK: “THE MARCH OF THE WOMEN” BY ELIZABETH JOHNSON

The entire song by Elizabeth Johnson is available on the Suffrage Wagon audio channel (https://soundcloud.com/suffragewagon/march-of-the-women-sung-by-elizabeth-johnson-a-spirit-of-1776-special).

Dr. Helen Pankhurst was recently featured in a photograph released on International Women’s Day in March 2015 showing her with the cast of the film “Suffragette.” This major motion picture from the U.K. stars Meryl Streep, Carey Mulligan, Helena Bonham Carter, Ben Whishaw, Brendan Gleeson, Romola Gerai, and others. It is the first film ever to be shot at the Houses of Parliament in London. “Suffragette,” the film, highlights the struggles of women’s rights activists during the late 19th and early 20th centuries.

“Both in the United States and in the United Kingdom, women fought long and hard for the right to vote, and to be voted in as politicians,” Dr. Pankhurst told Suffrage Wagon News Channel. “They faced derision and both private and public violence before attitudes started to change.

“The campaign for equal suffrage continues both in our two countries and all over the world. It is needed everywhere. Either the right for equality hasn’t been won, or it has in theory. But obstacles remain that impede progress on representation in practice,” Dr. Pankhurst continued.

“If we want a better world, every one of us needs to vote for those that are closest to representing our view in local and national elections. For those who feel their views are not represented by the current options of political candidates, more –not less—political activism is the solution. By caring enough to be politically engaged, we honor both ourselves and previous generations who campaigned for our right to have a voice,” Dr. Pankhurst concluded.

Although our SWAN Day opening festival at Suffrage Wagon Cafe has come to an end, we remain persistent in our goal of inspiring, motivating, educating, and entertaining audiences about how we stand on strong shoulders. The suffragists were “there” for us. Let’s be “there” for them by voting and becoming leaders in the world today.

IN OTHER NEWS: New York City will celebrate Elizabeth Cady Stanton’s 200th birthday on Thursday, November 12th with an artistic interpretation of the Declaration of Sentiments by feminists, activists, and artists at the Historic Great Hall at Cooper Union in New York City. More details to be announced. Stay tuned for updates and a surprise announcement about the music video, the “Spirit of 1776” suffragette anthem starring Eighty Bug and the Suffragist Sisters. Suffrage Wagon Cafe will continue planning special programs and events. 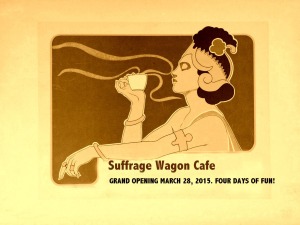 WRAP UP OF THE SUFFRAGE WAGON CAFE OPENING FESTIVAL PROGRAMS:

Link to March 29, 2015 Program: New 2015 film, “10 Days in a Madhouse” highlights the contributions of Nellie Bly, an early press woman and investigative reporter. There’s a film trailer, an intro from Suffrage Wagon Cafe, and a selected reading from Nellie Bly’s writing.